Under the direct leadership of the Ministry of Education of the People’s Republic of China, Chang'an University is one of the State 211 Project key development universities jointly financed and supported by the Ministry of Education, Ministry of Transport, Ministry of Land Resources, Ministry of Housing and Urban Rural Construction and Shaanxi Provincial Government. It is concurrently one of the key development universities on the State “985” Project advantage discipline innovation platform. The university was officially established in the year 2000 by merging the former Xi'an Highway University, Xi'an Engineering Institute and Northwest Institute of Construction Engineering, which were founded in the early 1950s. Chang’an University is located in the historical and cultural city of Xi'an and covers an area of more than 3,755 mu (approximately 250 hectares). The university comprises two teaching campuses and two practice bases. Through its 60 years of development, it has evolved into an influential comprehensive higher institution in China, with engineering as its main discipline focus, combining engineering with sciences, and with multidisciplinary development in economy, management and humanities. It has graduated more than 250,000 talents of different levels, mainly in the fields of highway transportation, land resources and environment and construction engineering. 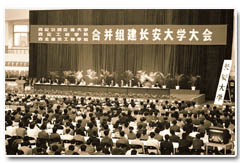 Chang’an University has 21 schools or departments, 5 national-level key disciplines, 26 provincial-level key disciplines, 8 post-doctoral research stations, 8 first-level and 52 second-level doctoral programs, 26 first-level and 122 second-level master programs, 40 undergraduate specialties as well as 8 fields of degree conferment of Mater of Public Management and Master of Industrial and Commercial Management, and 16 enrollment fields of masters in engineering. Furthermore, it is one of the national bases of culture and quality education for college students, and the selection and training base for reserved officers of the Chinese People's Armed Police. At present, the enrollment of full-time students in Chang’an University exceeds 34,000, of whom nearly 10,000 are doctoral and mater postgraduates and international students. The employment rate of the graduates stays stably above 93%. 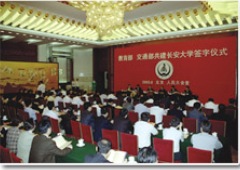 Chang’an University now has 2,067 full-time teachers, including 3 academicians of Chinese Academy of Engineering, 6 Yangtze River Scholar chair professors, 1,145 full and associate professors, of whom 166 are doctoral supervisors, and 755 are master supervisors, 5 national and provincial level experts with outstanding contributions, and 80 teachers who have been enrolled on the advanced talent list of the “National Talent Project of the New Millennium” or have been entered in the advanced talent bank of Ministry of Education, Ministry of Transportation and Shaanxi Province. 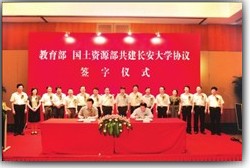 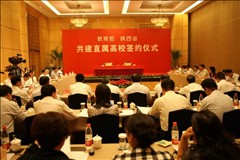 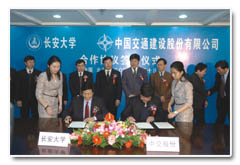 The university is also one of the first universities which have provided foreign aid education and recruited students from regions like Hong Kong, Macao and Taiwan. Following the trend of the internationalization of higher education of the country, in recent year, the university has strengthened its exchange and cooperation with over 120 higher education and scientific research institutions from more than 20 countries such as the United States, the United Kingdom, Russia, Ukraine, Japan and the South Korea. It has also joined the Sino-US ““1 +2 +1” Talent Nurturing Program and established an international universities league with Rostov State Architectural University from Russia. The Chang’an Foreign Language Training Centre of the State Administration of Foreign Experts Affairs is located here. In recent year, the university has hosted and sponsored a series of high-level international and national academic conferences.

After years of long exploration and practice, Chang’an University has gradually formed its spirit of “self-improving constantly, seeking truth and being pragmatic, striving in unity and pursuing excellence” and earned its high social reputation. On this new historical stage, the university continues to adhere to the socialist theory with Chinese characteristics and strive along the path of connotation, characteristic and harmonious development so as to maximally improve its talent cultivation quality and build the university into a first-class tertiary institution with distinctive characteristics and remarkable strength in China.